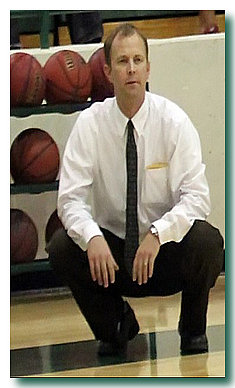 “If you want to be the best on the court, you have to strive to be the best in all areas of your life.” This quote from Coach Wirth has been his blueprint for success on and off the court when it comes to building quality basketball programs.

Coach Wirth has 18 years experience as a Varsity Head Coach and started the 3D Hoops Institute to provide a quality program for youth baskeball.

Coach Wirth led the Campo Verde HS Boys' Basketball from 2013-18. Highlights include most career wins and best record in school history. Prior to arriving at Campo Verde, Coach Wirth was the Varsity Head Coach at Skyline High School in Mesa, Arizona for seven years. During his tenure at Skyline, multiple school records were set including most overall wins and the team G.P.A averaged over a 3.0 in six of the seven years.

Previous stops also included Maricopa High School where Coach Wirth was named Maricopa Unified School District Teacher of the Year and lead the Varsity Boys’ basketball team to a 21-3 record in 2003 and a State Tournament appearance in 2002. In his first head coaching opportunity in the state of Iowa, Coach Wirth led Armstrong-Ringsted High School to more wins in his first year than the previous three years along with being recognized with a team G.P.A of 3.0 or higher. Coach Wirth also found time to be one of the original founders and leaders of the Arizona Basketball Coaches Association serving in various capacities. He currently directs the Arizona Summer Shootouts one of the largest and best summer High School basketball team camps for the past 14 years. Coach Wirth also supports and promotes the Fellowship of Christian Athletes organization.

A native of Iowa, Coach Wirth was a member of the successful University of Minnesota-Morris Men’s Basketball program before finishing his degree in Secondary Education at Iowa State University. As a player, Coach Wirth was a 2x 1st Team All-Conference and 2x Hon. Mention All-State High School selection.

Check out Arizona Varsity's interview article on Coach Wirth below

Inside the Locker room article on Coach Wirth

Coach Sandoval is a lifetime basketball enthusiast; he loves playing, watching, and especially teaching the game.  A driveway legend, Daniel also played for a city champion high school team and then continued playing competitive travel basketball while serving in the United States Navy.
Having now coached 5 seasons of basketball over the last two years, including over 20 different teams in the age range of 1st to 8th grade, Coach Sandoval has realized he has a real passion for teaching the fundamentals and advanced skills required to succeed on the court.  A true believer in 3 dimensional coaching, he strives to coach the fundamentals of basketball alongside the fundamentals of life by coaching the body, mind, and spirit of all players.
Coach Sandoval's best teammate over the past 13 years has been his wife who can be seen cheering on the Coyotes from the stands every Saturday.

Coach Andy is a former All-Region player for Coach Wirth and is the current Freshmen coach at Campo Verde High School.  His is also currently attending school looking to enter law enforcement.  Coach Andy was a team leader on 2014-15 CVHS squad that won their final 6 games in a row setting the record for most wins in school history.